The Word TAFSIR is an arabic word تفسير which is derived from the root ‘fassara’ . Someone who writes tafsir is a ‘mufassir…”. IBN KATHIR – Famous Mufassir (commentator of Quran) مفسر . Well known and respected for his keen memory and a highly regarded scholar of tafsir (commentary) – Born 1302 AD. Memorized entire Quran, word-for-word along and memorized huge number of sayings and teachings (hadeeth) of the prophet Muhammad, peace be upon him, along with sayings and commentary about Quran from Muhammad’s companions, may Allah be pleased with them. The Tafsir of Ibn Kathir is of the most respected and accepted explanations for the Quran and is the most widely used explanations in Arabic used today. The difficulty of translating Quran to English is quite another problem and not one to be taken lightly nor is it for the average translators to decide what is meant by the words of Almighty God. 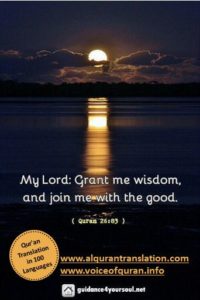 While we agree it is impossible to bring the exact meaning of everything from Quran to English, it is our intention to bring about a better understanding for non-Arab speakers at least a basic understanding of the meaning of the Quran for the English speaking readers.

The Excellence of quran

This site presents the work of scholarly experts of Arabic, English, hadeeth and tafsir, together with the Guidance of Almighty God – the Explanation of God’s Words in simple English.

Please visit subsequent links of videos on YouTube for continuity of videos series: